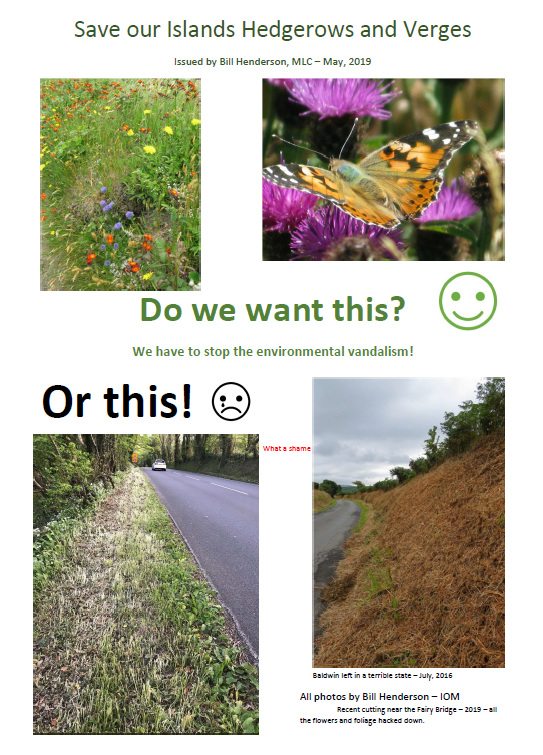 Save our Island's hedgerows and verges – that’s the message from Bill Henderson MLC, following a recent spate of hedgerow and verge cutting around the Island.

Mr. Henderson states that our hedgerows and verges are of critical wildlife and nature conservation importance and in many cases are the only semi natural habitat available to wildlife. He goes on to point out that around 90% of our Island is either agriculturally developed or urbanised thus making the tiny fragments of what is left – our semi-natural habitat - incredibly important for the Islands Wildlife in all of its forms – including and especially our hedgerows and verges – which makes them even more important to look after in an environmentally responsible way. A view from space by NASA of our Island graphically illustrates this scale of development and what is left of any semi-natural habitat - https://www.google.co.uk/search?q=NASA+image+iom&tbm=isch&source=hp&sa=X&ved=2ahUKEwivlpbryZ3iAhUOGuwKHWchBigQ7Al6BAgJEA8&biw=1264&bih=599&dpr=1.5#imgrc=ibfxHEMgcq9IJM:

Mr. Henderson sates – ‘We have a DEFA Hedge Cutting Code (which he extensively contributed to), we have a Manx Wildlife Act, we are now designated with UNESCO Biosphere Status, we have an IOM Biodiversity Tynwald approved strategy and we have to address climate change as our Chief Minister has fully recognised. Smashing our hedgerows and verges up is not the way forward and flies in the face of all the above and established biodiversity principles. We have to get better and smarter at looking after our natural heritage in more sustainable ways that actively encourage it – not destroy it: and recognise it for its true intrinsic worth. I fully recognise that in small localised spots hedgerow and verge cutting will have to take place – in reasonable proportion - out of public safety – but not on the size and scale we regularly see, nor should it be done in the bird nesting season as we are currently seeing – which is against the Code of Practice, and all the above policies and environmental principles. We also have to fully recognise the incredible value and positive aspects our natural heritage brings in mitigation to climate change.’

It us understood that Mr. Henderson is so concerned regarding this, and the number of complaints he has received in recent weeks from members of the public and wildlife organisations such as Manx Birdlife that he has placed questions to the Environment Minister on this important conservation and biodiversity issue.

Mr. Henderson went on – ‘Our hedgerows and verges give great rural character and charm to our Island, great amenity value, which visitors especially love. The social value they give our community is something really special, and indeed will probably have been recorded as one reason for our Biosphere designation – we need to look after our hedgerows and verges sustainably and with biodiversity and climate change in mind. Our hedgerows and verges also add to the Islands unique identity and culture – ticking IOM Programme for Government criteria. They also provide Wildlife Corridors: It is well documented that nature is becoming fragmented, partitioned and compartmentalised. Without connectivity, small islands of habitat and disconnected populations are disproportionately vulnerable to decline. We should be building upon this not cutting it down in the way we do. It is highly feasible (and growing practice elsewhere) to design in corridors for wildlife to connect across habitats within develop areas and with natural habitat adjoining such areas.’

Mr Henderson continued - ‘It is incumbent on us all, Government and our Local Authorities to more fully recognise the critical wildlife, environmental and social value of our hedgerows and verges. Education aimed at changing mind sets has to be achieved. Just bowing to some who complain they want a neat formal garden for the Island is not good enough for 2019. It will only serve to accelerate biodiversity loss for our Island ultimately having a huge negative impact to our natural heritage in general.’

‘The Island is currently seeing, and also as reported in UK media, European media and scientific studies the declines in biodiversity, the huge drop in insect numbers and evidence of falling numbers of certain bird species. Wild birds especially are dependent on our hedgerows and verges for nesting and insect food. Pollinating insects such as bees, mammals such as bats and hedgehogs are also dependent on this kind of habitat. We have witnessed the extinction and near extinction of some plant species already and a well-loved countryside bird – practically extinct – now on the IOM - The Yellow Hammer. This kind of very poor environmental management is adding to these negative effects. We are making a deteriorating situation even worse and speeding it up’ Mr. Henderson said.

‘We need to stand by the environmental principles that have been established and approved and support all the positives which I believe much if not all of our community wish for. We need to re-engage with our environment on a more profound level recognising it for its true worth, conserving it better and enhancing it,’ Mr. Henderson finished.