(First published October 2021 at www.biosphere.im. With thanks to UNESCO IOM Biosphere for kind permission to reproduce this article.)

In September 2021, the Manx Ornithological Society (MOS) published the latest edition of its journal Peregrine (Vol. 12), the longest running natural history journal on the Isle of Man, this edition marking its 80th anniversary; quite an achievement for a small Island. Chris Sharpe, Editor, fills us in on its history and value.

The first volume, published in 1941 by Will Cowin and Ken Williamson, was called Yn Shirragh ny Ree, Manx for Peregrine, with subsequent publications going under the name it now holds.

Until the death of Will Cowin in 1958, the journal was published by the Manx Field Club, after which Field Club members were offered membership of the Field Section of the Isle of Man Natural History and Antiquarian Society (NH&AS), which then took over responsibility for the journal.

In 1973 Peregrine became a joint publication of the NH&AS and the Manx Bird Club (now the MOS). Since 1976, production has been the sole responsibility of the MOS, supported financially with a contribution from Manx National Heritage. 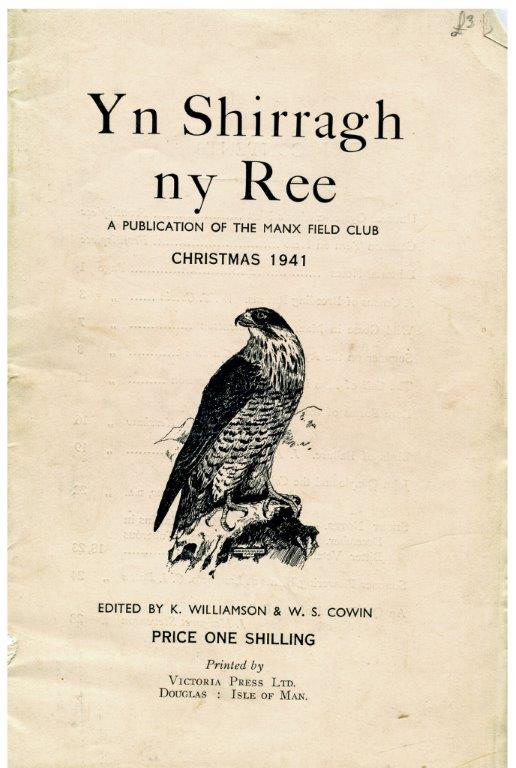 The first volume (1.1-1.6 from 1941 to 1949) contained notes of interest by members, including, for example, a sadly all too relevant article on the failure of the tern colonies at what is now the Ayres National Nature Reserve (Vol. 1.2, 1944). By 1952 (Vol. 2.1) ‘Peregrine’ included, for the first time, ‘Manx Ornithological Notes’, covering the years 1948 and 1949; a systematic list, with notes, of the birds seen on the Island during the years under review. These notes, previously published separately from 1922, now comprise the ‘Manx Bird Report’, and have been an annual feature of Peregrine since; the latest volume covering the years 2017 and 2018.

Reports have evolved in the period since 1952 and have, for many years, included reference to all species observed during the year, including commentary on their local and wider conservation status, notable numbers, first and last dates of observation of migrants and a summary of known breeding records. The journal also includes the Manx list of all species ever recorded on the Island (including the Calf of Man), keeping readers up to date with additions since the last publication as well as changes in the taxonomic order and changes to scientific and common names.

Other regular articles within Peregrine include reports on ringing activity during the year and on Chough Pyrrhocorax pyrrhocorax and Red Grouse Lagopus lagopus as well as notes on species new to the Island or of the first breeding of a species. Examples in recent volumes include the first record of Dark-eyed Junco Junco hyemalis (Vol. 11) and the first breeding record of Gadwall Mareca strepera (Vol. 12). 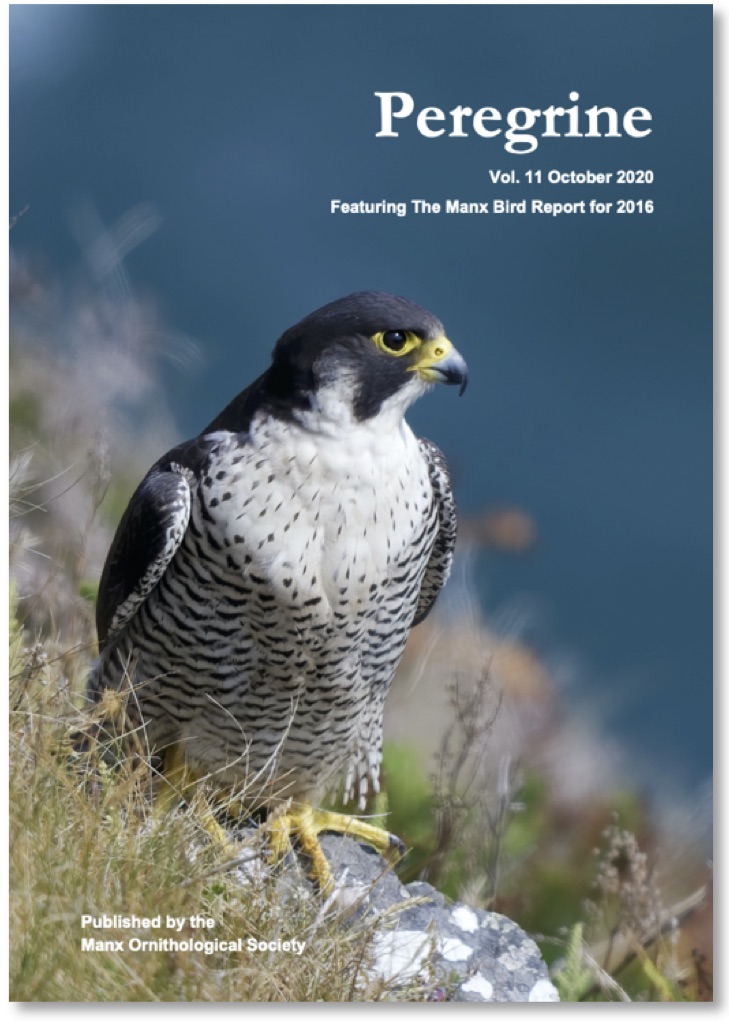 The MOS has always aimed to encourage a wider interest in watching birds and reporting of sightings by the general public, the success of this aim being reflected in the number of people now submitting records each year. In 1948/49 records from less than 20 people were used when compiling the annual summaries, by 1996 an estimated 150 people contributed about 2,000 records and by 2017/2018 that figure stood at over 500, between them providing in excess of 141,000 records for the two years.

Though much of each volume is dedicated to bird records and ornithology, the Society has ensured that articles and reports on other taxa continue to be represented within its journal, remaining true to the original ethos of the publication. Articles in recent volumes have included an annual summary of butterflies and the first records of Lesser Horseshoe Bat in the Island.

Biological records (a record of a species in a particular place at a particular time by a named person), provided by interested volunteers in their leisure time, comprise an invaluable resource. Commonly referred to as ‘Citizen Science’ such records have been the backbone of the articles appearing in the journal since its inception, augmented by a range of more formal research, such as the Manx Bird Atlas and periodic census work on species such as Chough, Hen Harrier and Peregrine Falcon. Data from the public are often key to identifying changes in distribution, breeding status and frequency of occurrence.

For example, records provided via the MOS were used to help inform the distribution and breeding status of a wide range of species for the Manx Bird Atlas and, more recently, were used by Manx BirdLife when writing the paper ‘Birds of Conservation Concern in the Isle of Man’, the first ever evaluation of local species against a high (red) to low (green) scale of conservation importance.

Presenting, through Peregrine, the combined knowledge of species across a range of taxa over many years is something which the MOS is proud to have responsibility for, providing an irreplaceable resource for the Island. Historical datasets are vital in helping to identify changes in the fortunes of species over time. The Society will continue to encourage the flow of credible timely information so that, in another 80 years, those that follow in our footsteps are able to use our records to inform their decision making and are as proud of their historical volumes as we are of ours.

Ornithological records for the Island should be submitted to Manx BirdLife, who maintain the National database of birds.

Copies of the most recent Peregrine (Vol. 12) are available from the MOS by contacting Mr Mark Pidgeon (lizpidgeon@btopenworld.com), with the next volume, including the annual bird reports for 2019 & 2020, scheduled for publication in March 2022.